I spent about 2 1/2 weeks in Tucson in late March and early April. As a result, I was there over Easter weekend. In irreverent honour of the season, Theresa, my host/should-have-been sister, and I decided to "resurrect" a 34" by 34" table.

We found a $5 set of table legs, and by 12:30pm Easter Sunday had gathered our supplies. Including beer. And set to work. 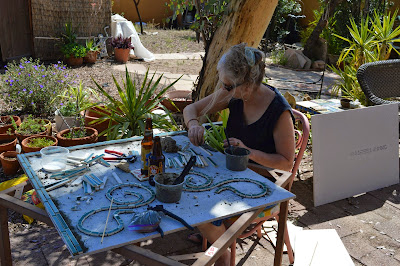 It should be noted that we had a deadline, my flight back to Canada, but even more so her partner's return, as the table was to be a surprise for him. So less than 7 hours after arriving home with supplies, we frantically laid the last pieces of tile in the dwindling light of day. 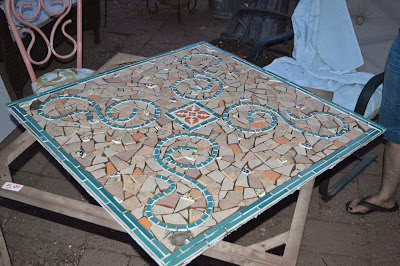 The next day and a half saw us figuring out the additional esthetics of the project, including grouting, spray painting legs, recovering chairs and final assembly. We eventually presented the table with great aplomb and very shortly thereafter were thoroughly enjoying it. 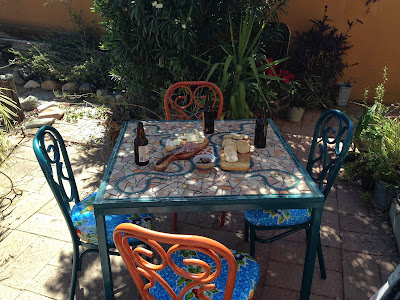 Thus, this now becomes the largest mosaic project on this blog where the mosaicking--including design and supply procuring--was actually completed in one day. My dearest Theresa, may there be many more hectic projects in our future.
Email Post