I received many comments after my last post from people wanting me to blog about the backsplash project, since I've temporarily suspended M.A.D to get this done.

This is the backsplash that got started nearly a year ago in my brain, for my dad. Some of you know my dad as this: 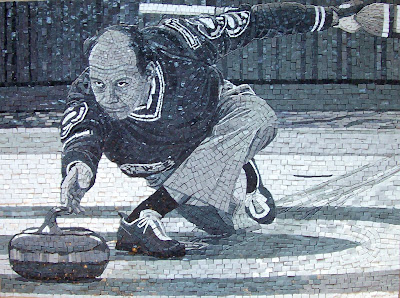 For those of you that have met him, he's a pretty conservative guy, and REALLY likes Roman mosaics. So a Romanesque mosaic it is for his backsplash. The dimensions are approximately 1' by 14'.

First came the great debate of what method to use. I chose thinset to mesh double direct, based on the advice of my good friend Lynne Chinn. I'm not an experienced installer, and have been worried about the adhesive coming up to the top of the tile during installation, and not being able to get the grout in, for one. So I wanted to glue to the mesh in a way that would prevent this from happening. I also don't like that mesh has some "wiggle" to it while installing, so I thought that thinset pancakes would be more rigid. As well, marble is really hard to use indirect, since it is so thick. It is often wider at the top than bottom, or vice versa. This means that the reverse side usually ends up looking really different than the side you were looking at while working. As this is my first backsplash, I really want to know what is going on as I work on it. Plus I'm using the fantastic stone tiles from Mosaic Rocks, and they are pretty much the same thickness, so I'm not worried about the flat surface.
So here's my gathered materials: 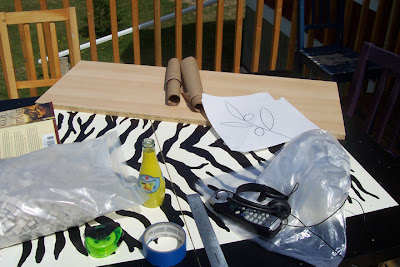 And here it is all ready to go. Drawing first (proving that drawing is not my best skill), then plastic, then mesh. I've taped to a laminated board. Easy to remove tape from, portable if I want to work outside, or if I want to rotate the whole thing for easier working. 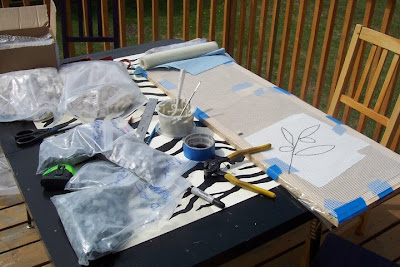 I would have blogged this all yesterday, except my Internet was down, so the first WIP picture is the end of Day 2: 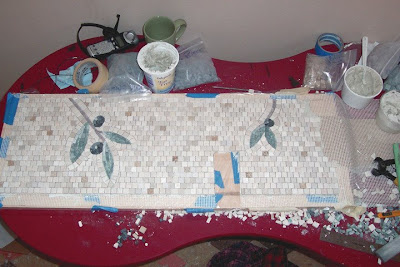 As you can see, the progess is pretty fast, as there is a lot of Opus Tesselatum, which I have now learned to lay two tiles at a time. About 3 linear feet have been laid at this point. You can see the mesh trailing off the right side of the board. I've already cut this part into sections, but haven't removed them. Then I'll have to slide everything over, retape, and keep going.

And here's a close up of one of the olive branches: 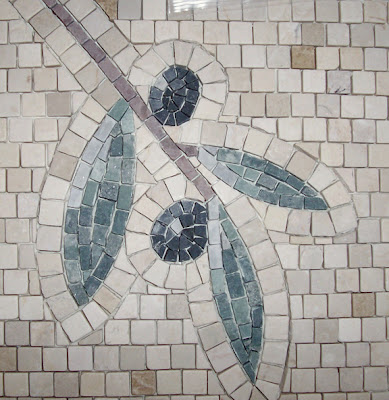 Won't get quite as much done tomorrow, as I probably only have about 2 hours to work on it.

Christine Brallier said…
Thank you for posting your progress. I love to see how others go about it. Love the subtle color palette of the marble. Never used it before but I do get interested when I see others use it!
June 4, 2009 at 10:37 PM