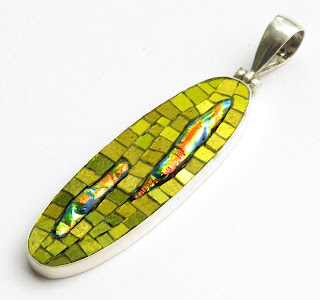 45mm by 15mm - Mosaic gold, dichroic glass in sterling silver
Email for Purchase Info
While I may be in my happy place, I have had some difficulty. I'm not sure if it was the exercise bike with weird pedal, or if I over did the running, but in June my lower back began to have some issues. Now, I've had some back issues since my early twenties, which I believe began due to an improperly set broken collar bone. So I'm no stranger to back pain, and when it strikes, I find a run or other exercise, plus a lot of stretching, some ice, and maybe some ibuprofen does the trick. Worst case scenario, I go for a massage or two. When this began, in June, those options weren't yet available.
By early August, I got to the point where I could, and did get some massage, to no avail. Two days before I flew, I saw a physiotherapist, who helped enough to get me through the flight. By this point, I decided to give the running a rest to see if that helped, though I did go for one run upon arrival here in Santorini.
I'm now seeing a physiotherapist here on Santorini, and despite 5 appointments, have had very little relief. There have been days that have been so frustrating and painful I've wept. Sitting is a challenge for any length of time, so working is a struggle. Not running is making me grumpy. It's hard to stay positive when there's little light at the end of the tunnel.
Yet I'm grateful to have the vehicle to get to appointments, and friends to occasionally distract me with giggles and wine.